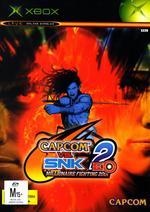 Due to COVID-19, we're unable to accept orders for non-essentials items at this time. Learn more...
Now, two of the world’s fighting giants battle on the Xbox and Xbox Live systems! Capcom vs. SNK2 E.O. unleashes lightning fast animation and classic arcade fighting action in a colossal slug-fest. Choose from over 44 characters from the Capcom and SNK fighting universes, then customize your character’s fighting style with your own favorite fighting “Groove.” Enter into the online arena using the Xbox Live system and battle for online dominance!