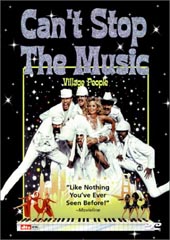 I have been looking for this movie for over 2 years and thank you for the prompt delivery.

Can't stop the movie would have to be one of the best movies of music and dance of all times. I live in Australia and was unable to purchase it from anywhere here. I would like to thank Mighty Ape for stocking such a great movie.

New York City DJ/songwriter Jack Morell (Steve Guttenberg) needs just one big break to get his music heard and land a record deal. But with the help of his retired supermodel roommate (Valerie Perrine) and an uptight tax attorney (Olympic champion Bruce Jenne r), they bring together six singing macho men from the Greenwich Village scene for an outrageously '80s adventure of fun, fantasy and disco fever. Welcome to the not quite straight story of the creation of the Village People in their one and only musical extravaganza. This is Can't Stop the Music!

Reviled by critics but beloved by fans, Can't Stop the Music is still a jaw-dropping experience for everyone. Tammy Grimes, Marilyn Sokol and June Havoc co-star in this notorious camp classic produced by Allan Carr (Grease) that features unforgettable dialogue, unimaginable performances, unbelievable production numbers of hits like "Y.M.C.A." and so much more!