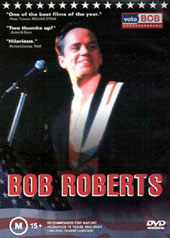 Unavailable
Sorry, this product is not currently available to order
This Razor-sharp 'Mockumentary' garnered acclaim from critics and audiences alike.

Tim Robbins plays right-wing presidential candidate Bob Roberts, who plays his guitar to songs about 'whining liberals' and the like, as a documentary crew follows him throughout his campaign.

"One of the best films of the year." -- Peter Travis, ROLLING STONE.