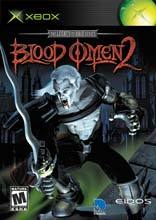 Due to COVID-19, we're unable to accept new orders at this time. Learn more...
Blood Omen 2, the latest installment in the Legacy of Kain Series is a 3rd person 3D action/combat game in which the player assumes the role of the vampire Kain. A compelling story drives the player through huge lushly detailed 3D environments and challenges their game play skills in combat, puzzle solving, stealth and exploration. With each success, the player achieves new dark powers that will grant Kain the ability to access treacherous new areas to explore and the power to face stronger, more aggressive enemies.

400 years have passed since the vampire Kain damned the world in the original Blood Omen, choosing to rule the world in damnation then die for it’s salvation. Now Kain, who once controlled the land of Nosgoth with his vampire armies, finds his brethren slain and his dark powers stripped by a mysterious figure. To reclaim his rule and exact his vengeance, Kain must dispatch armies of zealot soldiers and overcome legions of demons in order to uncover the ominous plot that threatens the land he seeks to conquer.

You are the vampire Kain - the most evil figure to grace a video game console.

Move through crowds unseen cloaked in stealth, travel stories above the peasant herds on which you feed leaping from roof-top to roof-top, and use mind-control on hapless fools to help you overcome vampire-proof inventions.

The comprehensive menu of unstoppable attacks, nimble combos, and special moves will satiate even the hardened of fighting game fans. The most beautiful graphics seen on a console to date! The world that Kain moves through is a lushly detailed, blood-chilling gothic environment that is not only gorgeous to the eye, but also alive with the soon to be dead.