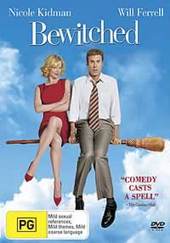 This re-imagining of the popular 60s TV sitcom, Bewitched gives it a magical twist.

Jack Wyatt (Will Ferrell) is a difficult Hollywood star who is trying to make a comeback by playing Darrin Stephens in a remake of the series. When Jack sees the beautiful Isabel Bigelow (Nicole Kidman), he thinks that she'd be right for the part of his on-screen wife, Samantha and, not only that, she can twitch her nose beautifully. Isabel turns out to be even more appropriate than Jack could ever have imagined because she really is a witch who knows just the right spells to cast on egocentric actors.

Completing the cast are Michael Caine as Isabelâs father, Nigel who is concerned by his daughters interest in the mortal world, and Shirley MacLaine as the actress who is hired to play Samantha's in­terfering mother, Endora!