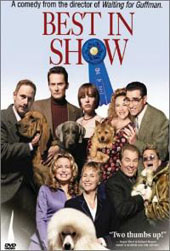 Very, very funny. Everyone will get a laugh out of this.

Some pets deserve a little more respect than others.

The owners (and handlers) of five show dogs head for the Mayflower Kennel Club Dog Show. A film crew interviews them as they prepare for the trip, arrive at Philly's Taft Hotel, and compete. From Florida come the Flecks: she keeps running into old lovers. A wordless ancient in a wheelchair and his buxom trophy wife who may have a thing for the dog's handler own the two-time defending best in show, a poodle.

From the piney woods of N.C. comes a fella who wants to be a ventriloquist. High-strung DINKs feud loudly in front of their Weimaraner. Two outrÃ© gay men from Tribeca round out the profiled owners. The dog show brings out the essence of the humans. Who will be best in show?