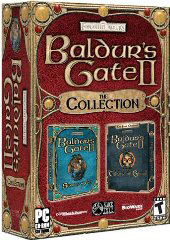 Baldur's Gate II: Shadows of Amn is a mythic saga continuing the much-loved Baldur's Gate storyline. The Forgotten Realms adventure ensues along the southern portion of the Sword Coast in the merchant kingdom known as Amn. The borders of this region include such diverse environments as the Elven forests of Tethir, the Cloudpeak Mountains, The Drow cities of the Underdark, and the Capitol City of Amn, Athkatla.