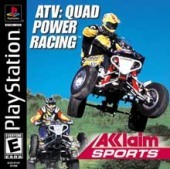 Due to COVID-19, we're unable to accept new orders at this time. Learn more...
Tear it up with ATV: Quad Power Racing on the PlayStation. This is the only quad racer in the world, period, and it's true to the dirt-shredding, air-catching, mud-spraying excitement of the sport. Race on twelve outdoor tracks on mountain, snow and desert terrain; traverse obstacles, create short cuts and take jumps on circuit-based and natural track layouts. Compete against other riders and pull power slides and rollovers while avoiding damages, or worse, a wipeout. ATV: Quad Power Racing is the hard-charging, turf-eating answer to your power fix needs, baby!