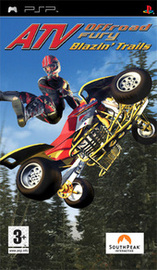 Unavailable
Sorry, this product is not currently available to order
Intense, free-roaming, off-road racing takes on a whole new meaning as gamers will be able to blaze their own trail, anytime, anywhere with ATV Offroad Fury Blazin' Trails for the PSP handheld entertainment system. Supporting multiple players via wireless multiplayer connectivity, riders will be able to choose from more than 24 highly detailed ATVs as they tear it up on more than 30 unique environments with six distinct terrain types including snow, dirt, mud, ice, water and grass. During both single and multi-player gameplay, gamers will be able to see from both first and third-person perspectives as they cruise through visually stunning backgrounds featuring water and mud effects along with fully interactive objects and instances such as ramps, tires, cones and trees.

ATV Offroad Fury Blazin' Trails for the PSP provides gamers several gameplay options including a training course, and competitions in several race modes such as race, freestyle, career or any of the various mini-games.