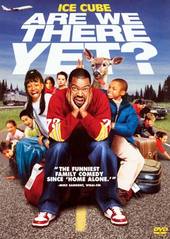 Are We There Yet?

Nick Persons (Ice Cube) is the affable owner of a sports memorabilia store and a shiny new 4WD, which is his pride and joy. He has also just spied something else he likes very much – sexy divorcee, Suzanne Kingston (Nia Long) who runs an event management service just across the street, but as he makes a beeline for her, he freezes when he notices that Suzanne comes with two attachments – kids. Nick doesn't like kids and these two, Lindsey and Kevin (Aleisha Allen and Philip Bolden) are first-rate brats whom we have already seen pulling some tortuous Home Alone-type tricks on an unsuspecting guy who has come calling on their mother.

Lindsey and Kevin are under the mistaken impression that their parents will get back together, so any potential boyfriend for mum is given the treatment. Against his better judgement, Nick does become friends with Suzanne after rescuing her on a rainy night when her car breaks down and Lindsey and Kevin instantly consider him the enemy. When Suzanne has to go to Vancouver for a job and her ex pulls out of his promise to baby-sit, reckless Nick, hoping to score some big points, offers to follow her to Vancouver with the kids.