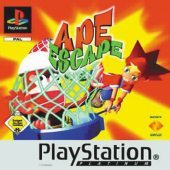 Due to COVID-19, we're unable to accept orders for non-essentials items at this time. Learn more...
Go Completely ape over the first and only 3D action/platform game specifically designed to use the Dual Shock(tm) Controller to its fullest power and fun. Gamers must test their dexterity by using both controller sticks to simultaneously maneuver through the game and control their gadgets and vehicles, toggling back and forth between their inventory by using the square, triangle, circle, and x buttons.
Players must control movement and activate an arsenal of gadgets including a Stun Club, Time Net, Sky Flyer (propeller), Slingback Shooter (slingshot), Super Hoop (hula hoop-style gadget), Monkey Radar, a Remote Control Car, and Water Net.

Other key game features include:

Vehicles including a tank and a row boat (players must maneuver vehicles using both sticks of the Dual Shock Analog Controller);
Mini bonus games that unfold throughout gameplay;
A total of 25 levels spanning eight worlds; and
Training rooms to learn how to use each unique gadget.

In the game, Specter and his band of apes have invaded the professor's laboratory at the zoo, stolen intelligence-enhancing helmets, and activated the time machine to transport themselves back in time in an attempt to make monkeys the new rulers of the world. Spike, a fearless young boy, arrives at the lab with his friend, Jake, just as Specter and his monkey minions are being transported back in time. Now it is up to Spike to capture all of the monkeys and save the world.
Release date NZ
May 4th, 2001
Brand
Publisher
Sony
UPC
711719265528
Product ID
1454693