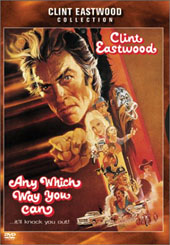 Unavailable
Sorry, this product is not currently available to order
This sequel to EVERY WHICH WAY BUT LOOSE finds fist fighting legend Philo Beddoe (Clint Eastwood) attempting to live out a quiet backwoods retirement with his mother (Ruth Gordon), his girlfriend (Sandra Locke) and his mischievous orangutan, Clyde. Some mobsters who routinely pit black widow scorpions against each other for kicks, however, want Philo to go into battle with a friend (William Smith) who just might be the only man Philo can't take down. This sequel goes even farther than the original in its uncommon combination of children's entertainment and bare knuckle action. Also included are biker gangs, raunchy humor and bold sexuality featuring both the elderly and orangutans. Stunt director Buddy Van Horne masterfully stages the final bout between Eastwood and Wilson, one of the most brutal sequences ever in a PG-rated film. Eastwood also teams with Ray Charles for a memorable honky tonk number, "Beers To You." Special Features:
Release date NZ
May 26th, 2004
Movie Format
DVD Region
Edition
Aspect Ratio
Director
Buddy Van Horn
Language
English, French
Length (Minutes)
116
Stars
Studio
Warner Bros.
Subtitles
English, French
Supported Audio
Genres
Original Release Year
1980
UPC
9325336010358
Product ID
1459447