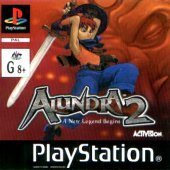 Due to COVID-19, we're unable to accept orders for non-essentials items at this time. Learn more...
An epic struggle between good and evil ignites the Kingdom of Varuna as the peaceful realm falls under the control of a sinister Baron. You are Flint, a renegade swordsman seeking revenge on the pirates who killed your mother and now flourish under the new regime.

Through a land of unsuspecting danger and adventure you wield your sword, navigating an intricate story wrought with bizarre characters, brain-twisting puzzles and wild games. Beware! An even greater evil is about to be revealed.

From Contrail, the Producers of Legend of Legaia, Wild Arms, and Alundra, comes an Adventure of a Lifetime!

* Solve Puzzles in 3D! Hundreds of action-based puzzles greet you in your quest. Some are easy - others are mind numbing - but once you solve them, you'll be ever closer to fulfilling your destiny. You can also collect special puzzle pieces and medals along your journey to upgrade your sword, armor or elemental power.

* Get Even More Immersed! A thoroughly engaging story along with hours of cinematics, voice-overs and a sweeping score weave together to immerse you in an adventure you'll never forget. Uncover secret treasures, hidden map locations and special items including magical herbs, rings and amulets. Learn new sword techniques and magic spells as your quest unfolds. The longer you play, the more the world of Alundra 2 becomes yours.