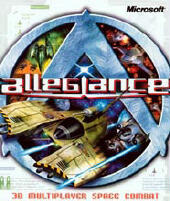 Unavailable
Sorry, this product is not currently available to order
Allegiance the MSN Gaming Zone space-combat game from the minds of Microsoft Research, combines the challenges of tactical squadron-based combat, intense one-on-one space dogfights, and amazing graphical and sound effects into a space-action experience like nothing you've seen before.

All taking place on the MSN Gaming Zone, you can elect to get into the action immediately in death-match style arenas, or pledge Allegiance to one of the diverse Factions and join a squadron. And when you play on the Allegiance Zone, you'll be able to engage hundreds of players in death-match style arenas, compete in tournaments, and access exclusive additional civilizations!