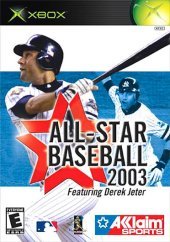 All-new Expansion Play allows baseball fanatics to choose a city, stadium and team logo and add that team into the Major leagues.

A 3-man broadcast booth with Bob Brenly, Thom Brennaman and Steve Lyons for the most in-depth commentary.

Franchise mode allows users to play and build their favorite team for up to twenty consecutive seasons.

All-new Expansion draft: users will draft from a pool of unprotected players and build a team from free agents and minor leaguers.

Cooperstown Hall Of Fame team featuring your favorite sluggers from the past like Mike Schmidt, Reggie Jackson and Yogi Berra.

All 30 Major League teams and over 900 players all with official stadiums, logos and uniforms.

Over 50 stadiums to choose from including 9 classic stadiums and 10 expansion stadiums.