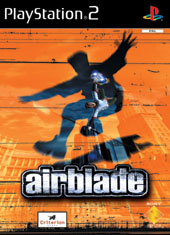 Unavailable
Sorry, this product is not currently available to order
Forget wheels. Forget waves. AirBlade takes boarding to a new level – riding the air itself on an anti-gravity hoverboard (and, of course, pulling incredible tricks).

Unlike conventional boarding games, AirBlade is plot and mission-based. You control Ethan, a laid-back, reluctant hero and boarding addict. His best friend, Oscar, is the original scientific genius, working on his own top-secret research project for the GCP Corporation, creating limitless energy from gravitational fields.

The trouble is, GCP Corporation doesn’t like the idea of limitless energy – it’s not good news for its oil based business interests – so tries to pull the plug on Oscar’s project. But not before Oscar manages to quit the building complex, complete with a package tucked under his arm – a stolen prototype hoverboard he’d built with the technology.

Desperate to get “their” prototype back and keep a lid on the whole affair, GCP kidnap Oscar. As Ethan, it’s down to you – with the help of your hacker friend, Kat - to dodge the GCP goons, find out exactly where Oscar’s held, and free him from the clutches of the bad guys with the snappy suits and expense accounts. Oh, and while you’re about it, why not try pulling the coolest stunts you’ve ever seen in your life?

AirBlade is easy to pick up and ride, ensuring you’ll look cool from the first time you hit the air – you won’t spend the first hour picking bits of the street from your mouth. But that doesn’t mean it’s easy. It’ll take time and familiarity to master: the longer you practice, the more skill you’ll develop and the better the stunts you’ll pull.

It all takes place in a great-looking – but equally importantly a completely interactive – environment, allowing you to utilise the unique, gravity-defying design to bounce off the scenery and perform tricks that would be impossible on a conventional board.

You’ll use the city around you to pull amazing stunts – swing from flagpoles, grind along handrails and weave your way in, out and even over lines of traffic, skitch behind vehicles, knock down enemies and generally scare the life out of the general public. Plus, as you progress through the game, the capabilities of the board continually increase, allowing you to pull more and more spectacular tricks.

If you’re good enough, each mission will reward you with “evolution points” that open up new areas, and you can also test your skill and ingenuity by hunting down dozens of special bonus missions.

There are ten game modes in all, comprising five single-player, four two-player and even a party-play mode for those late-night post-clubbing sessions.

With a great plot, a cracking script and cool, cinematic presentation, including some spectacular special effects, all set to very cool music, AirBlade is as much a statement of attitude and intent as it is a game. Cool and edgy, it’s the ultimate in original gameplay, featuring technology so cool it hasn’t been invented yet.