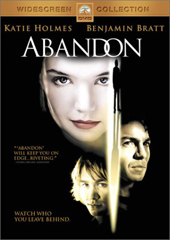 Watch who you leave behind. Take an unforgettable pyschological thrill ride with ABANDON, and a sexy all-star cast featuring Katie Holmes and Benjamin Bratt. The pressures of finishing her thesis at prestigious university and earning a position with a premier consulting firm have Katie Burke (Holmes) seeing things.

She still hasn't gotten over her freshman romance two years earlier with Embry, and his mysterious disappearance without a trace still haunts her. The trail is cold, but detective Wade Handler (Bratt), a recovering alcoholic, enters Katie's chaotic campus life to put the pieces of Embry's vanishing and of his own life together. Just as some compelling evidence comes to light, Embry mysteriously reappears only to wreak havoc on Katie's new affection for Wade.