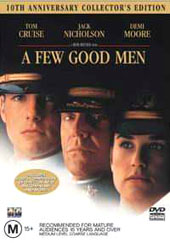 Defence lawyers, Kaffee and Galloway are assigned the case of defending two US soldiers, accused of murdering a fellow soldier who was deemed to have ‘broken the code’. Kaffee and Galloway soon run into a brick wall Col. Jessup, who sees himself as a military ‘untouchable.’ The accused claim they were obeying orders, and that the death was an accident.