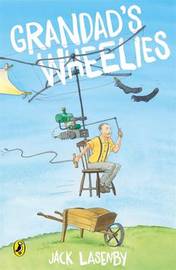 Unavailable
Sorry, this product is not currently available to order
A charming novel for young readers by an award-winning writer, based on a young boy's summer in the countryside and the characters - real and imagined - that he meets. Dad has to go to work, so you go down to see Mr Bluenose; there's always something to do there. He tells you stories while you give him a hand to sort apples, feed the pigs, teach Horse how to push the wheelbarrow, and terrify boys who plan to raid the apple trees. On the way home, you look for empty bottles and sell them for boiled lollies to Mr Bryce at the store. He pays you more boiled lollies for telling him stories about how Mr Bluenose got his name, how he rode a whale to London, and was so seasick for so long in the crow's nest that he ran away from sea to Waharoa and planted his orchard. And then there's always Freddy Jones and the other kids to scare with stories about vampires, moreporks, and the White Woman of Waharoa who has a face as smooth as an egga Think Spike Milligan meets Roald Dhhal, this is the captivating and amusing, rich and fun-filled story of a country summer, seen through a child's eye and created by a master story-teller.

Jack Lasenby is one of our finest writers for children. 'Perhaps the most innately New Zealand writer of all New Zealand writers for children,' according to Margaret Mahy (NZ Listener). He has been recognised by being awarded the 2014 Prime Minister's Award for Literary Achievement - for Fiction. He writes of heartland New Zealand - small towns, farms, and the bush, of the Depression era, as well as futuristic novels of great depth. He's 'observant, erudite, witty and often caustic'. His novels inspired Judith Holloway to rank him with Margaret Mahy and Maurice Gee as 'children's writers whose themes, originality and sheer literariness makes them almost as important and entertaining to adults' (NZ Books). John Marsden wrote of Lasenby's post-apocalypse title Because We Were the Travellers, that it was, 'Intense, vivid, poetic - a cruel and beautiful book.' Jack Lasenby was born in Waharoa, New Zealand in 1931. During the 1950s he was a deer-culler and possum trapper in the Ureweras. He's a former school teacher, lecturer in English at the Wellington Teachers' College, and editor of the School Journal. Jack Lasenby has been awarded many fellowships including the Writer's Fellowship at the Victoria University of Wellington, the Writer in Residence at the Dunedin College of Education, the Sargeson Fellowship in Auckland and was awarded the prestigious Margaret Mahy Medal in 2003 and the Storylines Gaelyn Gordon Award for a Much-loved Book in 2012 for his first collection of stories, Uncle Trev. The Jack Lasenby Award was established by the Wellington Book Association in 2002. He's the author of over 30 books for children, which include the Aunt Effie series, the Uncle Trev titles, 'The Sedden Street Gang' trilogy, 'The Travellers' quartet and the Harry Wakatipu books. He has been the recipient many times of the most highly regarded children's book awards: the Esther Glen Medal, the Aim Children's Book Award, and the New Zealand Post Children's Book Award. His award-winning books include The Lake, The Conjuror, The Waterfall, The Battle of Pook Island, Because We Were the Travellers and most recently, in 2009, the New Zealand Post Junior Fiction Award for Old Drumble and in 2012, the New Zealand Post Young Adult Fiction Award for Calling the Gods. The characters who inhabit Lasenby's stories vary enormously: from the anarchic and street-smart gang in Dead Man's Head to the hilarious and ludicrous, lazy pack-horse Harry Wakatipu; from the green canvas invalid's pyjama wearing Aunt Effie who leads her 26 nieces and nephews on a wild ark ride over the Vast Untrodden Ureweras to the lone boy and old woman who are the Travellers. Jack Lasenby lives in Wellington where he cares for his much-loved garden, and sets aside time most days for writing and reading.
Release date NZ
May 6th, 2005
Author
Pages
120
Interest Age
8-12 yrs
Audience
Country of Publication
New Zealand
Imprint
Longacre Press
Year First Published
2005
Dimensions
165x220x25
ISBN-13
9781877361067
Product ID
1633980