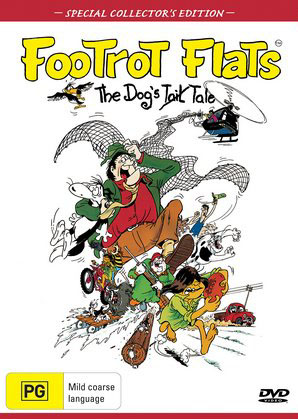 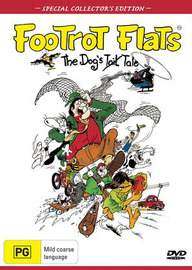 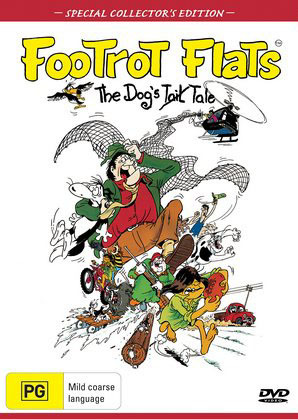 Loved this movie as a kid. Great opportunity to relive it again as an adult.

It brings the books to life with the bonus of an excellent musical soundtrack.

Love this Classic Kiwi movie. Was a gift from Kiwi Family oversea's

Footrot Flats is the archetypal farming community that everyone knows exists somewhere.

In the cartoon strips – and now in the animated feature film – the day-to-day events of Footrot Flats are chronicled by an extremely intelligent dog with a great sense of his own worth. He is simply known as “Dog”.

Dog is either owned by or owns Wal Footrot. Wal farms 400 acres of swamp between the Ureweras and the sea with the help of Dog. Wal is a good-humoured fellow who smiles readily. The last time was when his mate Cooch got his arm caught down a rabbit burrow while trying to rescue a rabbit. He laughed aloud when the rabbit bit Cooch. That was in 1974.

Cooch Windgrass is Wal's mate, neighbour and right-hand man. He is a native of the ‘Flats’ – his family owns 2000 acres of swamp, tussock, scrub, forest and muc flat. Cooch has two main claims to fame – he can catch flounder with his bare feet and he owns a female bitch called Jess who just happens to be Dog's girlfriend.

There are two women in Wal Footrot's life: his Aunt Dolly who lives in Tauranga and visits occasionally, and Dahlene ‘Cheeky’ Hobson, hairdresser in Raupo (pop 406). In school holidays Wal's niece Pongo and a local kid called Rangi (footy genius) help about the farm.

Across the river which borders Footrot Flats live the Murphys – Irish Murphy and his two sons Hunk and Spit together with their dogs, known as the Murphy Hellhounds, and the fearsome crocopigs.