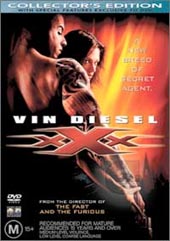 There he uncovers the group's fiendish plan for a doomsday scenario using a deadly biological weapon. He also finds the time to fit in some adrenaline-pumping stunts and to get up close and personal with bearded Eurobaddie Yorgi's (Marton Csokas) girlfriend Yelena (Asia Argento).