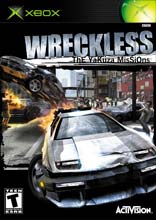 Due to COVID-19, we're unable to accept orders for non-essentials items at this time. Learn more...
It's summer in Hong Kong and the Mafia is out of control. Yakuza mobsters are carrying out territorial fueds and reckless high-speed chases through out the city. It's up to you to drive against crime in fender-to-fender showdowns and white-knuckle missions. Your objectives: Take the wheel, take on the Mob and take back the streets.

Wreckless: The Yakaza Missions for the Xbox video game system is the finest high-suspense, high-speed, mission-based driving game for the much-anticipated new plafform. Choose one of two roles, each with its own storyline: that of an elite anti-Yakuza squad member taking on the vicious mafia or as a high-level secret agent trying to uncover corrupt ties between the mafia and the police. Wreckless takes this thrilling genre to new heights with ultra-realistic, completely free-roaming, interactive environments, unique, pulse-pounding missions, real-time car damage, instant neplays and action-packed gameplay.

Face Life-Threatening Missions - Drive your way through a total of 20 white-knuckle missions featurlng a variety of tough objectives. Among your challenges: chase Yakuza transport cars, rescue a police captain trapped in a destroyed tunnel, smash into mob cars attempting to escape crime scenes, capture a mafia boss before he escapes by helicopter and clear a hijacked bus's path so that it won't crash and explode the bomb that has been planted inside.

Talk About a Killer Commute - Experience realistic driving physics and realistic threats to your life in up-close-and-personal car crashes with real-time vehicle deformation. Crash into and destroy your enemies' vehicles and take some auto body-bnuising hits yourself. Better buckle up for safety.

Choose Your Story - Pick from two immersive storylines with 10 different missions each. Take the wheel as a member of an elite squad tracking down lawless Yakuza units or drive against crime as a high-level secret agent who is trying to expose illicit activities between the Yakuza and police.

Mix it Up in Fully Interactive Environments - Fight to make the streets safe in free-roaming, detailed, Hong Kong city environments loaded with shortcuts and alternate routes. Not only are the environments fully interactive, they are fuily destructible, too. Search and destroy through tunnels in crowded intersections, curly back roads...even along the edge of a skyscraper rooftop.
Release date NZ
October 3rd, 2002
Game Platform
Publisher
Activision
UPC
5030917015908
Product ID
1456499