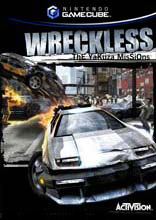 Due to COVID-19, we're unable to accept orders for non-essentials items at this time. Learn more...
WRECKLESS: The Yakuza Missions- the top-selling mission-based combat game for the Xbox video game system from Microsoft is hitting the PlayStation®2 computer entertainment system with cool new features and exclusive mini-missions. In this high-suspense, high-speed, mission based driving game, players choose one of two roles, each with its own storyline; that of an elite anti-Yakuza squad member or a high-level secret agent. WRECKLESS: The Yakuza Missions features all the ultra-realistic, interactive environments and pulse-pounding missions of the Xbox version, plus two-player action, more vehicles, new sub-missions that unlock cheats, more interactive pedestrians, 60 fps gameplay, and a “Free Roam” mode that lets players explore the city without having a mission to complete.

• Face Life-Threatening Missions – Players must make their way through a total of 40 white-knuckle missions, featuring a variety of tough objectives in solo or two-player mode. Among the challenges players will face: chase Yakuza transport cars, rescue a police captain trapped in a destroyed tunnel, smash into mob cars attempting to escape crime scenes and clear a hijacked bus’ path so that it won’t crash and explode the bomb that has been planted inside. New sub-missions allow players to unlock game enhancing cheats.
• Talk About a Killer Commute – Gamers will experience realistic driving physics and threats to their life in up-close-and-personal car crashes with real-time vehicle deformation. Players will crash into and destroy enemy’ vehicles and take some body-bruising hits themselves. Gamers better buckle up for safety.
• Choose Your Story – Pick from two immersive storylines with 40 different missions each. Take the wheel as a member of an elite squad tracking down lawless Yakuza units or drive against crime as a high-level secret agent who is trying to expose illicit activities between the Yakuza and police.
• Mix It Up in Fully Interactive Environments – Fight to make the streets safe in free-roaming, detailed, Hong Kong city environments loaded with shortcuts and alternate routes. Not only are the environments fully interactive, they are fully destructible, too. In this edition of the game, pedestrians are more numerous and varied, with increased interaction abilities and vocabulary. The player’s car will even collide with them!