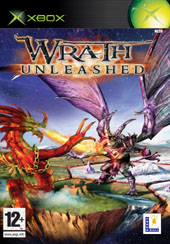 Due to COVID-19, we're unable to accept orders for non-essentials items at this time. Learn more...
Mythological creatures from the dawn of time. Epic contests between darkness and light. Battles for domination of giant floating arenas. Welcome to the fantastic, deadly world of Wrath Unleashed. Part intense fighting-action. Part thought-provoking strategy. Pure vicious head-to-head mayhem. This unique action-strategy game pits up to four players and an array of all-powerful fantasy creatures against each other. And you'll need to unleash every bit of your wrath upon the world to win. Features:
Release date NZ
February 26th, 2004
Game Platform
Publisher
LucasArts
UPC
23272001476
Product ID
1457789