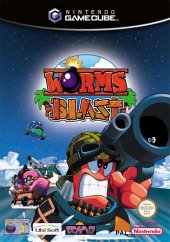 Unavailable
Sorry, this product is not currently available to order
The aim of the game is to survive, either longer than your opponent or until one player has reached a set objective. Worms Blast gives us our fifth trip to the Worms universe. You control a team of worms, you square off against opposing worm team(s) - either AI or human-controlled - in a kill-them-before-they-kill-you fight . As always in the series, Worms Blast tests the players thinking, skill, reflexes, forward planning and nerve. Control your character of choice, 6 hand picked individuals with serious delusions of grandeur. Cross the world to crush your opponents. The 9 characters in Worms Blast are taken a step further, rendered as 3D models for the first time. They are given personality, a mean arsenal of weaponry and a unique boat for them to terrorise the waves on. A completely new fresh addictive strategic war game for this very huge franchise. Hilarious combat system and addictive gameplay, displaying the unique so well established Worms humour, utilising the overall style, objects and voices for great effect. A wide variety of game modes: Survival, Star Collection, Tide Trial, Death Match, Don`t Drop Em Use a frightening array of new weapons capable of mass destruction: piranha, sea monster, Shield, Boat Repair, Fish Food, Reverse Controls, Sailors Delight, Time Stands Still, Water Balance, Weather Balloon, Torpedo, Speed Up, Double Damage, Ghost Crates, Laser.