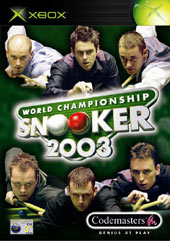 Due to COVID-19, we're unable to accept orders for non-essentials items at this time. Learn more...
Boasting a new complex artificial Intelligence system developed using new neural network techniques and an advanced and enhanced game physics and visual engine, the title will be an engaging and intuitively playable game for the far-reaching audience the sport attracts. In the UK, over seven million people watched the recently televised Embassy World Championship Snooker final - a greater number than the FA Cup Final attracted.

Presentation will be TV-realistic, with camera views from roving cameras, in-pocket, over-pocket and pocket to player cameras. All the star players featured are being captured in high detail and will be represented in their true likeness thanks to an improved character modelling system (9,000-15,000 polygons per player model). A new animation system will create natural character movements, including full facial expressions.