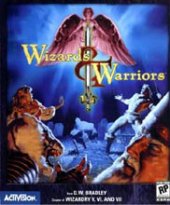 Unavailable
Sorry, this product is not currently available to order
In an enchanted medieval realm known as the Gael Serran, an evil Pharaoh has overcome a curse to wreak havoc. Only the legendary Mavin Sword - a blade forged of twin metals, one cursed by evil, the other blessed by the divine - has the power to bring his defeat. With the assistance of Kerah, an angel, and Erathsmedor, a dragon, you must embark on a dangerous quest to uncover the legend of the Mavin Sword and bring an end to all evil in the land. Run, swim, jump, climb, fly, drag objects, disarm traps and pick locks. Fight with swords, as well as ranged and thrown weapons. Trade and steal items such as keys, magic wands, potions and more. The game includes over 300 standard inventory items, including 50 different customizable costume pieces, such as armor and weapons. Enter an incredible world rendered in 3-D - environments, spells and attacks come to live as never before. Explore massive outdoor regions, including lush forests, grasslands, swamps, mountains and an underwater city. Each region also contains indoor adventures, including eerie dungeon and dramatic castle settings. Wizards & Warriors is being heralded in the media as one of the largest RPG's ever created.

Features:
* Your Quest Begins Within. The path to discover the Mavin Sword is not an easy one. Set before you are over 100 adventures, quests and mini-quests to complete. Your merits will be tested, your skills pushed to the limit. You must train your character by choosing from more than 30 unique skills, and acquire special abilities from over 50 possible character traits, to build yourself into a worthy adventurer.

* Your Path Will Cross the Paths of Others. Be assured, your journey through the lands of the Gael Serran will not be a lonely one. You will meet hundreds of other inhabitants, both friendly and fierce, along the way. The friendly encounters will help you gather information, embark upon quests, acquire new weapons and powerful artifacts, and everything is automatically recorded in your journal to keep track of your progress. The fierce will be monstrous and strategic battles requiring all of your abilities, skills and magical powers to vanquish these hostile creatures who wish to take your life.

* Choose Your Companions Wisely. You will be called on to create your own party of up to six adventurers. Choosing from 10 different character clans, including Human, Elf, Dwarf, Gnome, Reptialian, Tigercat, Ratling, and other exotic types, and an initial character role of Warrior, Wizard, Priest, or Rogue, you will train your characters in the town guilds to change to any other of the game's 15 different character roles, including Ranger, Samurai, Paladin, Warlock, Monk, Ninja, Trickster, and Barbarian, keeping all of the powers and abilities of all your former roles while gaining the special abilities that come with the new one.

* Face the Challenge of a Lifetime. Your strength and mettle will be tested as you run, swim, jump, climb, move objects, disarm traps and pick locks. Fight with swords, ranged and thrown weapons of all kinds, even including primitive bombs! Trade and steal items such as keys, magic wands, potions and more. You may equip with weapons and armors from more than 300 standard inventory items, including over 50 different costume pieces, and you can customize your gear to add special characteristics and powers with enchantments and blessings.

* A Medieval World Awaits. The world of the Gael-Serran is an incredible experience. Vivid 3-D environments surround you. The spells you unleash and the attacks you endure come to life with stunning detail. Your adventure will lead you across massive outdoor regions, including lush forests, grasslands, swamps, mountains and an underwater city. You will also explore eerie dungeons and castles - striving on in the face of pure evil wherever your quest may lead.
Re-released on
September 5th, 2006
Game Platform
Media Format
PC DVD-ROM
Publisher
Activision
UPC
5030917011993
Product ID
1455548