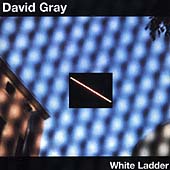 This product is not currently available new.
Available from Marketplace sellers:
This is an Enhanced audio CD which contains regular audio tracks and multimedia computer files.

This is an Enhanced CD, which contains both regular audio tracks and multimedia computer files.

David Gray began his career utilizing bare-bones folk-rock arrangements that left plenty of room for his Dylan/Van Morrison-inspired vocals and lyrics to weave their spell. Subsequently, he submerged his unique qualities somewhat in thick production. WHITE LADDER finds a workable balance between these two extremes. Some of the tracks are little more than Gray plus rhythm section, recalling the simplistic grace of his debut A CENTURY ENDS; on other cuts, synthesizers and electronic rhythms are incorporated in a tasteful, organic way that lends modernity to the proceedings without imposing upon the spirit of the songs.

As always, the most important thing is Gray's lyrical and vocal skill, which remain pleasingly intact. He leavens his simple, heartfelt observations with just the right amount of poetic imagery, much in the same manner that the electronic touches are added to spice up WHITE LADDER's neo-folk arrangements.

Condition
Used - Good
Used but with signs of wear. May not contain original manuals and packaging.
Seller Details
Nickart108 5 stars Ships from Featherston