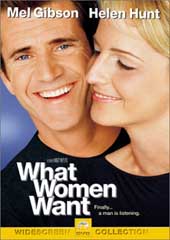 What Do Women Want? I'll just go ask my wife…wait…I don't have a wife…well…I guess we'll never know. Anyway back to the movie…

It's a nice little love story, where Mel Gibson accidentally gains the ability to hear women's thoughts and all the pros/cons that come with it.

Mel Gibson and Helen Hunt are great in this. And it has a nice mix of comedy and romance. 4 out of 5 stars.

He has the power to hear everything women are thinking. Finally… a man is listening.

Nick Marshall, Playboy and Hot Shot in advertising, thinks he's God's gift to women. After a little accident, he discovers that he is suddenly able to hear what women really think. First, Nick is pretty disappointed when he discovers that his beloved macho behaviour does not exactly contribute to being desired. Then, his upcoming dream position in the company is being given to a new team member: Darcy, not only a woman, but a man-eating one, who also is a very talented ad expert. So, Nick decides to sabotage his new boss by reading her thoughts and selling her ideas as his own. Unfortunately, love gets in his way.