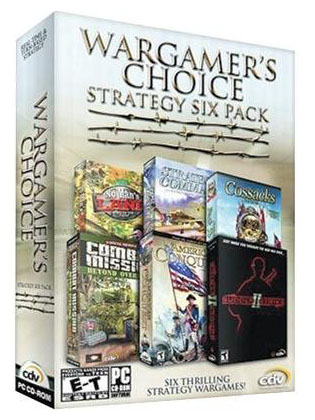 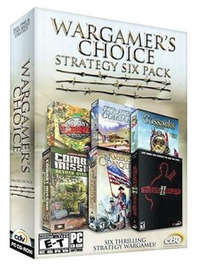 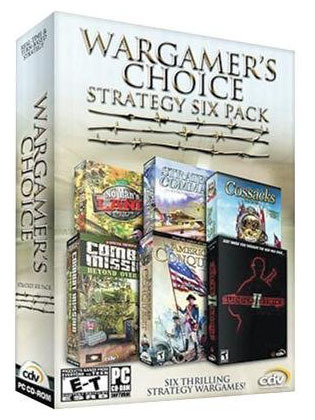 Unavailable
Sorry, this product is not currently available to order
The Wargamer's Choice: Strategy Six Pack includes the following strategy titles for one great price:

Set in World War II, Sudden Strike is a tactical war game with authentic historical background and compelling gameplay. This time round players can control Russian, British, American, German and Japanese forces with historical reference and accuracy throughout. Each side will have their own realistically modelled vehicles and troops as well as a new damage model to provide an even greater emphasis on realism.

The scope of the game is huge, encompassing such events as the landing of the first European in the New World, exploration of the vast expanses of America, development of colonies, and the formation of the United States, Canada, Mexico, and South America among others. Experience the rise and fall of the Mayan and Incan empires, numerous colonial wars, and the Revolutionary War.

Cossacks: Back to War

In addition to the features of Cossacks: The Art of War the second add-on Cossacks: Back To War will include 100 new single missions, as well as new nations, and new units. The two new nations include Switzerland and Hungary with each containing 20 new buildings and 4 new units. The additional units include Turkish and Algerian troops, the infamous Bedouins.

Strategic Command - European Theater is WWII Grand Strategy at its best. As the supreme commander of the Axis or Allied forces, the player shapes the fates of the nations at war during the Second World War in Europe.

Political options, research and upgrade of equipment, management of supply and resources and the strategic employment of one's armed forces are some of the keys to success.

With limited phase restrictions and wide open turns you are in complete control to try many different approaches and entertain just as many possible outcomes. The future of Europe and perhaps ultimate glory is in your hands.

Combat Mission is a 1-2 player, turn-based, simultaneous-execution 3D simulation of WWII tactical warfare. It combines unparalleled game depth and ease of use with a true 3D environment. The move to the 3rd dimension is not just to look cool, rather it it improves the accuracy of the simulation. Think of the world around us - it's all 3D. True 3D LOS, 3D spotting, 3D terrain, and 3D trajectories are a lot more realistic than 2D approximations, so that is what CM delivers!

No Man's Land: Fight for Your Rights!

Westward Ho! In No Mans Land, the player leads the colonization of the American continent between 1600 und 1900. In three campaigns, divided into 30 diversified missions, the player sees the historical development of this era from the viewpoint of six different ethnic groups: Englishmen, settlers, American patriots, Spaniards and forest- and prairie Indians.

The units are able to swim, dive and act in day- and night missions, with morale and experience being highly valued. Features closely related to the game theme, such as horse saddling or railway construction, offer additional possibilities beyond their atmospheric value.

As to content, the campaigns follow a coherent storyline which is embedded in the historic surroundings without having the exact rendering of particular events dictating the course of the game. Rather, the missions play in the background of such events in order to provide the player with reference points and to intensify the atmosphere.