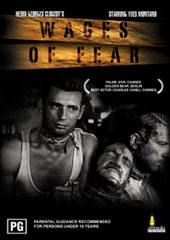 Due to COVID-19, we're unable to accept orders for non-essentials items at this time. Learn more...
Part road movie, part suspense thriller, the plot of H.G. Clouzot's magnificent The Wages of Fear is simplicity itself. In the South American jungle, supplies of nitro-glycerine are urgently needed at a remote oil field. The unscrupulous American oil company pays four out-of-work men (Yves Montand, Charles Vanel, Folco Lulli and Peter Van Eyck) to deliver the supplies in two hulking trucks. A tense rivalry quickly develops between the two sets of drivers; a tension magnified thousand fold by the unforgiving heat, the lure of filthy lucre and the rough and rocky roads where the slightest jolt can result in agonising death. Which of the disparate, desperate desperadoes will survive the white-knuckle journey and claim the loot and the glory?

Fuelled by Armand Thirard's stunning photography and appropriately taut editing by Madeleine Gug and Henri Rust, The Wages of Fear offers on one level pure cinematic adventure, whilst also succeeding as an eye opening peek at a crazed world driven by machismo, lust, competitiveness and greed.