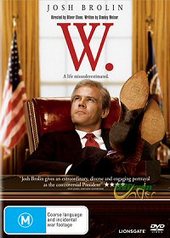 How did this improbable character, long considered the black sheep of his esteemed family, transform himself into the Leader of the Free World? W. is the profoundly American story of George W. Bush, a man who wrestled with his personal demons in the long shadow of his father, found God at 40 and made an incredible turnaround that ultimately led him to the White House.

W. follows his journey from a Yale frat house to the oil fields and baseball diamonds of Texas, all the way to 1600 Pennsylvania Ave. In the process, it reveals the making of the man who would become the 43nd President of the United States his struggles, his achievements and the consequences of both.