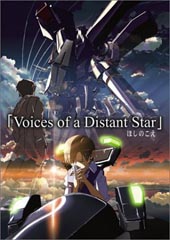 I thought this was just one of those romantic love stories.....a­gain(?) but it wasnt quite, which was a relief.I liked this story not only because of its stunning computer graphics and great story line but because the origional cast was 3 people (pianist,1 vo­cal,1 director/vo­cal) Yes when you see it you really will be wondering "this was made up by one guy?it only took 6months????!!!!"­like I did (i can almost guarantee it :) ) The director is amazing and I suspect we havent heard the last of him.

I loved this movie. First off the animation is excellent. It features a unique blend of CG (which I hate) and Cell Shading (which I love) merged with a more traditional style that looks reminiscent of Saikano.

All of it together, combined with the great musical track, the gifted dialogue (I dunno what gifted is in this context but it's the only word I can use to describe it!) Superb animation and even the action scenes (which seem a little out of place, though extremely well grafted) make this a MUST SEE!

When a mysterious alien force begins their annihilation of the human race, a young girl feels called to join the resistance. But the danger of an interstellar battle is not Mikako's greatest concern... for she has left behind the one young man she loves. And as Mikako pursues the Tarsians further into deep space, her only way to connect with Noboru is by cell-phone text messages. While Mikako risks her life to save mankind, Noboru waits. At first days, then months, then years for each new message that will let him know whether Mikako is still alive. And while she barely grows older in the timelessness of space, Noboru ages. How can the love of two young people, torn apart by war, survive? To what distance would you go...for your one true love?