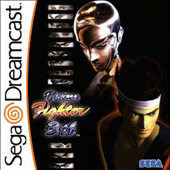 Due to COVID-19, we're unable to accept orders for non-essentials items at this time. Learn more...
Look out -- Wham! Bam! And a full-body Slam! This Dreamcast version of Sega's revolutionary fighting game packs a one-two-three punch. As one of 12 fierce characters, you have a single deadly goal: to kick some 3D ass 'til you win the World Fighting Tournament. Incredible 3D environments, fluid gameplay, and lifelike graphics enhance the smooth fighting moves you're used to in the mega-hit arcade original. An exclusive feature of the Dreamcast version is "Team Battle Mode," in which your custom three-person team goes head to head with an opponent's custom team. The fight is so realistic that characters actually watch their opponents' every life-like move, like when they fall forward from behind or lose their balance when pushed. Focus your razor-sharp reflexes and take lethal aim as you deliver bone-crunching blows to your reeling opponents. When the dust settles, you'll still be standing.