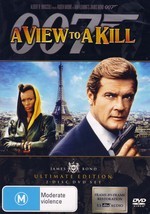 Roger Moore makes his the final appearance as the Secret Service Agent, James Bond in a VIEW TO A KILL.

Her Majesty's Secret Service sends Bond to stop Madcap computer industrialist Max Zorin (Christopher Walken) from triggering a massive earthquake in silicon valley and annihilating the global computer market. With the help of geoligist Stacey Sutton (Tanya Roberts), Bond must contend with May Day (Grace Jones) and Zorin’s endless supply of henchmen as he jet sets from Paris to San Francisco leaving a trail of empty martini glasses and broken Q-gadgets behind him.

In the 14th installment of the 007 series, director John Glen delivers an unforgettable and dazzling farewell vehicle for actor Roger Moore. Packed full of sex pot debutantes, whizz bang gadgetry and cliffhanger action sequences, VIEW TO A KILL is an unforgettable roller coaster ride. We miss you, Roger Moore.