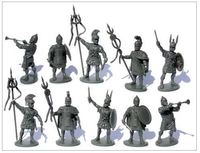 “The British Army during the Napoleonic Wars experienced a time of rapid change. At the beginning of the French Revolutionary Wars in 1793, the army was a small, awkwardly administered force of barely 40,000 men. By the end of the period, the numbers had vastly increased. At its peak, in 1813, the regular army contained over 250,000 men. The British infantry was "the only military force not to suffer a major reverse at the hands of Napoleonic France.”

Contents:
French Napoleonic Artillery 1804–1812 XI system with 6pdr guns and howitzers. This will allow collectors to field the later XI system with a crew in pre-Bardin uniforms.

This product is supplied unassembled and unpainted. Glue and paints not included.