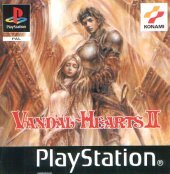 Due to COVID-19, we're unable to accept orders for non-essentials items at this time. Learn more...
Vandal-Hearts II is the sequel to the highly acclaimed Vandal-Hearts. The story begins when four Great Powers of the world confront one another for supremancy. As a result, the country has been divided into the East and West. Several young adventures begin war to re-unify the home country and return peace. Be prepared to witness a powerful religious and political movement as you experience an intertwinning story of conflicting ideologies.