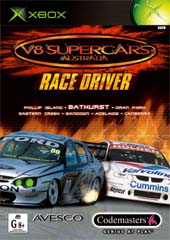 Due to COVID-19, we're unable to accept orders for non-essentials items at this time. Learn more...
Prepare to race against the whole world like never before as you take on Australia's greatest V8 Supercar drivers. Fully licensed by AVESCO Australia, V8 Supercars Race Driver promises the most immersive racing experience ever by enveloping gamers in the heart of Aussie V8 racing. Exhaust drifts across the asphalt as engines roar and tyres scream their impatience against the red-hot surface. Sunlight sparks off the bodywork of the touring cars drawing up to the grid and on the track ahead, heat shimmers transform the raceway into treacherous pools of quicksilver. As a car pulls into the number three position on the grid, the crowd explodes. Ryan McKane, the meteoric newcomer who’s taking the V8 Supercar circuit by storm, leans from his window to acknowledge his adoring fans. Not yet World Champion, but far from the unknown test driver of just a few short months ago, Ryan’s career has its foot hard on the gas pedal, powering towards the chequered flag. It’s going to take all your courage, all your skill and all your driving passion to take Ryan from rookie to a world-beating race driver, in this first-of-its-kind cinematic thrill-ride of a game. Power slide around the opposition, face your challenges head-on, cheer the successes and mourn the losses, but above all of these WIN.
Release date NZ
April 4th, 2003
Game Platform
Brand
Publisher
Codemasters
UPC
5024866321968
Product ID
1457412