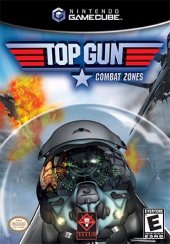 Due to COVID-19, we're unable to accept orders for non-essentials items at this time. Learn more...
The game will make full use of the Game Cube’s polygon-shifting capabilities, as the screenshots released today show. Everything – from the biggest oil rig to the tiniest ground detail – is rendered in a higher resolution, giving a clarity previously unseen in any console-based shooter.
But the enhancements are not just graphical. Feedback from the PlayStation 2 version has been digested to ensure Top Gun: Combat Zones plays as brilliantly as it looks – with redesigned campaigns and a refined game structure.

Fly as any one of the movie characters: Maverick, Jester, Iceman or Viper