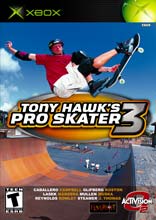 Unavailable
Sorry, this product is not currently available to order
The living legend of skateboarding, Tony Hawk, brings you into his world yet again with new features that take advantage of next generation system capabilities for even more cement shredding action than ever before, while keeping the same addictive game play you know and love. Skate all new global locations including Tokyo, Los Angeles and Canada through 9 massive living levels unlike anything ever created in a skateboarding game. You may not be able to live like the legend, but at least now you can skate like him.

Tony Hawks Pro Skater 3 is the revolutionary next generation sequel to the best selling sports game of 2001. Choose to ride with the skills of Tony Hawk; the most recognized skateboarding pro of all time, or as one of 12 other pro skaters. Graphics, animations and tricks/bails are significantly improved to take advantage of the next generation systems. Perform hundreds of tricks with an intuitive and solid control scheme in a variety of realistic obstacle-filled locations. Expanded multi-player modes and skate park editor increases playability for the ultimate in skateboarding fun!

The greatest line-up of professional skaters ever assembled! Skate as the legendary Tony Hawk or as one of a blockbuster team of street and vert skaters including Elissa Steamer, Jamie Thomas, Rodney Mullen, Eric Koston, Chad Muska, Kareem Campbell, Steve Caballero, Andrew Reynolds, Rune Glifterg, Geoff Rowley and Bucky Lasek. New to THPS3: Bam Margera from MTV's Jackass! Each pro will have completely modifiable outfits to dress the pros anyway you like.

9 massive living levels, real world locations. The game features some of the most popular international locations including Skater Island in Middleton RI, Los Angeles, Canada, Tokyo and Rio. These real world living levels are unlike any previous skateboarding games. Realistic, intelligent and interactive people and traffic can be avoided or skated. Watch people and cars stop at intersections, honk at skaters and slam on their brakes to avoid hitting them.