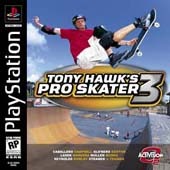 Greatest Line Up
This is the greatest line-up of professional skaters ever assembled! Skate as the legendary Tony Hawk or as one of a blockbuster team of street and vert skaters including Elissa Steamer, Jamie Thomas, Steve Caballero, Rune Glifberg, Geoff Rowley, Andrew Reynolds, Rodney Mullen, Eric Koston, Chad Muska, and Bucky Lasek. And new to Tony Hawk's Pro Skater 3: Bam Margera from MTV's Jackass.

Massive Living Levels
There are 10 massive living levels that are unlike anything ever created in previous skateboarding games. They are amazingly realistic and feature intelligent traffic that can be avoided or skated. Cars stop at intersections, honk at skaters and even slam on their brakes to avoid hitting them!

Custom Characters
With the enhanced Create-A-Skater players have the option to choose from male and female characters, and add glasses, hair, elbow pads, tattoos, etc. to customize the look of each character.