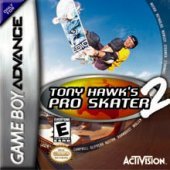 Unavailable
Sorry, this product is not currently available to order
Tony Hawk's Pro Skater 2 for the Nintendo Game Boy Advance pushes the hardware to the limit by offering 3D free roaming skating action in a portable system. Ollie, manual, grind or trick off some of the same levels from the Nintendo 64 version while you skate as one of 13 pro skaters. Based on all-new Game Boy Advance technology , THPS 2 is poised to take handheld gaming to new and exciting heights!

* Real world courses - In international skate parks/areas including: Philadelphia, New York, Skate Street Ventura, and Marseilles. Each environment will be filled with rails, ramps, and interactive objects that allow players to ride off of just about everything in the course.
Release date NZ
June 22nd, 2001
Game Platform
Brand
Publisher
Activision
Product ID
1456135