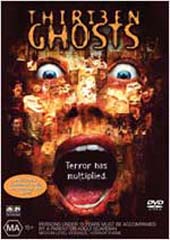 When a family inherits a magnificent old mansion from a distant uncle, it was supposed to be a dream come true…but the line between reality and nightmare shatters in the new horror blockbuster THIR13EN GHOSTS. As the thrilled family explores their new home, a triumph of glass and steel, unsettling things begin to happen – before the original inhabitants of the mansion begin to appear.

Too late, the humans realise that this is no ordinary estate, but rather a ghost prison that houses no less than 13 revenge-crazed specters…each feeding the machine itself to open the very door to hell. With a great cast including Shannon Elizabeth, Matthew Lillard, Award winner F. Murray Abraham and brought to you by Joel Silver, the genius behind THE MATRIX and ROMEO MUST DIE, this relentless shock ride will take you to new depths of horror where one fright after the other proves there`s certainly no filler in this chiller!