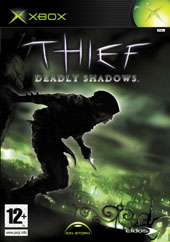 This game represents the pinnacle of xbox gaming. Thief – Deadly Shadows is truly more than the sum of its parts, and what great parts they are.

First off, let's start with the look and feel of the game. The graphics (although best played at night time as it's all very, appropriately, dark) are beautiful. Let me think of an appropriate superlative… well, awesome will just have to do. The sound is good too, with nice vocal work from the cast – despite the often cheesy accents. All together the sound and graphics build an atmosphere that I don't think I've encountered the like of before in any other game.

Game play is fantastic – sneaking around makes for a good change form the usual smash-em and bash-em of other games, and the great AI means you really do have to play by the rules, or you're dead meat. I found he game to be the perfect mix of difficulty – not too hard that I found it frustrating, and not so easy that I got bored.

The story – well, it's not fantastic (but then it's no RPG), but the movies are nice and the plot is original and clichés are noticeably absent.

All up, it's a winner. This game nails it's chosen genre. You're a thief in a grimy mediaeval city, and it all feels appropriately urban and dirty.

Thief – Deadly Shadows on Xbox is an amazing game to hit the stealth genre. You control a shady/evil looking character called Garrett, the “Master Thief”. With Garrett, you move through a storyline that seems to be set in an ancient time to; save lives, steal, slay and vanish into the shadows whilst learning about Garrett on the way.

The reason why I liked it is because the characters, backgrounds and objects all look so life like, and most objects in the environment are interactive and react to events just as they would in real life, which adds lots fun to gameplay.

The only thing I dislike about the game is the time it takes to save. Maybe it's just the xbox I played it on, i'm not to sure. But it was a little disappointing because I was slowed down at times when I felt the need to save frequently.

This game is one of those ones that gets your heart beating fast on the frightening parts. Overall it is a pleasure to admire the graphics and enjoyable to play.

1 out of 1 people found this review helpful.
You are Garrett, the master thief. Rarely seen and never caught, Garrett is the best that ever was. Able to sneak past any guard, pick any lock, and break into the most ingeniously secured residences. Garrett steals from the wealthy and gives to himself, making his living in the dark and foreboding City. Here crime and corruption are commonplace, wealthy nobles prey on the poor and each other, and magic and machinery coexist uneasily. World weary and cynical, Garrett wants nothing more than to be left alone to ply his trade. But things never work out that way.

According to ancient prophecies, a Dark Age is approaching. He's determined to stop this darkness before it comes, before someone loses an eye...or worse.

Garrett begins a cautious collaboration with the Keepers, an enigmatic and secretive group. They supply prophetic Glyphs he needs to avert the approaching doom, and he supplies the raw nerve, caustic wit, and artistic thievery that they lack. He sneaks his way through castles, mansions, prisons, cathedrals, dungeons, and museums, past armed guards, hired muscle, angry thugs, hideous monsters, and much worse. He's out to steal the City's oldest treasures - treasures that can help stop the darkness foretold in the prophecies.

But things quickly go awry. Disaster looms closer with every step Garrett takes. In his efforts to prevent the Dark Age, he has inadvertently roused an ancient hidden evil. To make matters worse, the Keepers, sworn to protect the City and maintain the balance, instead find themselves decaying from their very core. In their desperate search for the One who will betray them, their eyes turn to Garrett.

Once again, Garrett finds himself without allies, standing alone between the City and the forces that would crush it. Will his skills be enough to save the dying City? Can he survive betrayal, assassins, and war in the labyrinthine city streets? Will he destroy or be destroyed by the evil he awoke? And finally, what must he do to get what he wants most of all: to be left alone plying his trade as the City’s greatest… Thief?