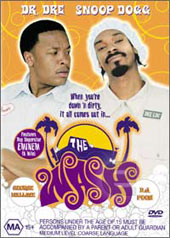 Unavailable
Sorry, this product is not currently available to order
The rent is due and his car's been booted. Sean (Dr. Dre) has to come up with some ends... and fast! With his best buddy and roommate Dee Loc (Snoop Dogg), he gets a job busting suds down at the local car wash. The first order of business is impressing Mr Washington (George Wallace), the gun-toting, dominoes-playing owner of The Wash. Comic tensions fly when Mr Washington hires Sean as Dee Loc's supervisor. Then they start getting harrassed by menacing phone calls from a disgruntled ex-employee. Then Dee Loc begins to suspect Sean of trying to slow his roll with the side hustles he's got going on in The Wash parking lot... and with the ladies in the locker room! And to top it all off, they both have to figure how to boost enough cash to pay off a gang of kidnappers who've snatched Mr Washington! If Sean, Dee Loc and the rest of the gang don't settle their differences and get Mr Washington back, the good times over at The Wash will soon come to an end. Say what!? Special Features:
Release date NZ
December 15th, 2003
Movie Format
DVD Region
Edition
Language
English
Length (Minutes)
93
Stars
Studio
Universal Pictures
Genre
Original Release Year
2001
UPC
5050582114805
Product ID
1462146