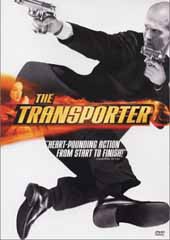 This is only the start of a great action adventure that will have you on the edge of your seat waiting for the next hit. For the guys: You get to see guns, martial arts, fast cars and explosions. For the girls: Jason Statham with no shirt of .

Once you've seen it, you'll be buying all three :D

This is the first of the Transporter movies plenty of action car chases etc good acting by Jason Stratham after watching this one i'm sure the next two will be as equally good. Well Worth watching.

Rules are made to be broken.

In the Luc Besson production The Transporter, Frank Martin (Jason Statham) is an ex-U.S. Special Forces operative now making a lucrative living as a no questions asked courier in France. He's a professional who plays by his own set of rules – never change the deal, no names, and never look in the package. However, on one job he opens a holdall to discover a young Asian woman languishing inside (Shu Qi).

Soon he has uncovered a nasty plan to smuggle Chinese migrant workers into France, he's dodging heat-seeking missiles and performing hand to hand combat with any number of goons and assorted tough guys