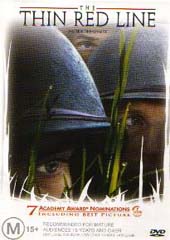 A powerful frontline cast – combining Hollywood's biggest names with its newest young stars – explodes into action as a U.S. infantry unit battles for control on Guadalcanal in this hauntingly realistic view of military and moral chaos in the Pacific during World War II.