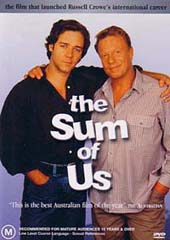 The Sum Of Us

“Extraordinarily funny [and] startlingly effective” (The San Francisco Examiner), this award-winning film is mandatory viewing for anyone who's ever been a parent or had one! Harry Mitchell (Thompson) has a problem with his gay son Jeff (Crowe): Harry thinks he needs to finda mate. With a loving push out of the nest and into the gay bars of Sydney he becomes his son's biggest cheerleader. But it's Harry's secret romance with an attractive but judgmental divorce that puts father and son at odds and prompts them to discover that acceptance is a two-way street.