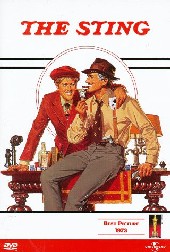 This product is no longer available new.
Available from Marketplace sellers:
Winner of seven Academy Awards including Best Picture, The Sting, is one of the most popular and critically-acclaimed films of all time. Set in the 1930s, this intricate comedy caper deals with an ambitious small-time crook (Robert Redford) and a veteran con man (Paul Newman) who seek revenge on the vicious crime lord (Robert Shaw) who murdered one of their gang. How this group of charlatans puts "the sting" on their enemy makes for the greatest double-cross in movie history, complete with an amazing surprise finish. Directed by George Roy Hill. Written by David S. Ward.

Winner of seven Academy Awards including Best Picture, Director, and Screenplay, this critical and box-office hit from 1973 provided a perfect reunion for director George Roy Hill and stars Paul Newman and Robert Redford, who previously delighted audiences with Butch Cassidy and the Sundance Kid. Set in 1936, the movie's about a pair of Chicago con artists (Newman and Redford) who find themselves in a high-stakes game against the master of all cheating mobsters (Robert Shaw) when they set out to avenge the murder of a mutual friend and partner. Using a bogus bookie joint as a front for their con of all cons, the two feel the heat from the Chicago Mob on one side and encroaching police on the other. But in a plot that contains more twists than a treacherous mountain road, the ultimate scam is pulled off with consummate style and panache. It's an added bonus that Newman and Redford were box-office kings at the top of their game, and while Shaw broods intensely as the Runyonesque villain, The Sting is further blessed by a host of great supporting players including Dana Elcar, Eileen Brennan, Ray Walston, Charles Durning, and Harold Gould. Thanks to the flavorful music score by Marvin Hamlisch, this was also the movie that sparked a nationwide revival of Scott Joplin's ragtime jazz, which is featured prominently on the soundtrack. One of the most entertaining movies of the early 1970s, The Sting is a welcome throwback to Hollywood's golden age of the '30s that hasn't lost any of its popular charm. --Jeff Shannon

Comments: * Region 2 Dvd. Item is in like new condition.