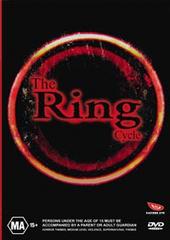 The critically acclaimed masterpiece of spine-chilling Japanese horror has come full circle with the Ring Trilogy. Prepare to be frightened. Each film delivers a tense atmosphere, filled with an overwhelming sense of dread and a potent presence of unworldly evil as you discover the deadly and chilling tale of an ancient, fatal curse. Dark, sinister and genuinely horrifying, you will never forget this series. The Ring was remade into a star studded Hollywood blockbuster, but nothing beats the original Japanese Ring series. You canâ€™t beat the best, and the first, curse Ring Within a week of watching a mysterious videotape, a group of teenagers are dead. The bodies are found gruesomely contorted, their eyes frozen as if they had seen something more terrifying than any physical threat.

The video then becomes an urban myth. Insidiously, an unseen force is pointing its deadly finger at those poor souls unable to resist their curiosity. One of those people is cynical journalist Reiko, who soon finds herself unwillingly drawn into a spiralling nightmare of fear from an unseen, omnipresent threat. Ring 2 In this sequel to Ringu (1998), Mai Takano is trying to learn more about the death of her boyfriend, Ryuji. She soon hears stories about a videotape haunted by the spirit of a girl named Sadako, who died many years earlier. Supposedly, anyone watching the tape will die of fright exactly one week later. After some investigating, she learns that Ryuji's son, Youichi, is developing the same psychic powers that Sadako had when she was alive.

Mai must now find some way to keep Yuuichi and herself from becoming Sadako's next victims. Ring 0 The video curse which struck in the previous installments of Ring was not, it turns out, the first incarnation of the fatal power possessed by Sadako. With a death toll reaching back as far as the 1950s – when open-reel tape recorders were the technological means by which the curse could manifest itself – the evil legacy has been more widespread than anyone could have imagined. Finally, the secrets surrounding the evolution of the curse are about to be be revealed